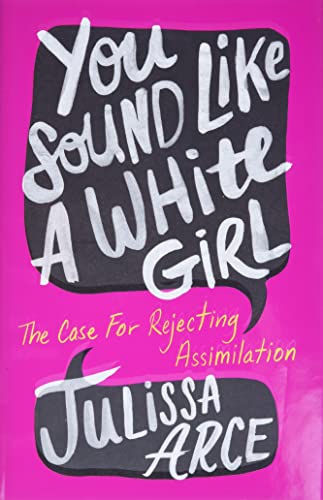 You Sound Like a White Girl: The Case for Rejecting Assimilation

“You sound like a white girl”. These were the words spoken to Julissa by a crush as she struggled to find her place in America. As a brown immigrant from Mexico, assimilation had been demanded of her since the moment she set foot in San Antonio, Texas, in 1994. She’d spent so much time getting rid of her accent so no one could tell English was her second language that in that moment she felt those words–you sound like a white girl–were a compliment. As a child, she didn’t yet understand that assimilating to “American” culture really meant imitating “white” America—that ‘sounding like a white girl’ was a racist idea meant to tame her, change her, and make her small. She ran the race, completing each stage, but never quite fit in, until she stopped running altogether.

In this dual polemic and manifesto, Julissa dives into and tears apart the lie that assimilation leads to belonging. She combs through history and her own story to break down this myth, arguing that assimilation is a moving finish line designed to keep Black and brown Americans and immigrants chasing racist American ideals. She talks about the Lie of Success, the Lie of Legality, the Lie of Whiteness, and the Lie of English – each promising that if you obtain these things, you will reach acceptance–you won’t be an outsider anymore. Instead, Julissa deftly argues, these demands leave her and those like her in a purgatory – neither able to secure the power and belonging of whiteness nor find it in the community and cultures whiteness demands we leave behind.

Here Julissa offers a bold new promise: Belonging only comes through celebrating yourself, your history, your culture, and everything that makes you uniquely you. Only in turning away from the white gaze can we truly make America beautiful. An America where difference is celebrated, heritage is shared and embraced, and belonging is for everyone. Through unearthing veiled history and reclaiming her own identity, Julissa shows us how to do this.

Julissa Arce is a best-selling author of My (Underground) American Dream (Entre las sombras del sueño americano) and Someone Like Me (Alguien como yo). She was named one of People en Español’s 25 Most Powerful Women of 2017 and 2019 Woman of the Year by the City of Los Angeles. She is a leading voice in the fights for social justice, immigrant rights and education equality.

Her commitment to education for all young people led her to co-create th Ascend Educational Fund (AEF) where she serves as chairwoman of the board. AEF is a college scholarship and mentorship program for immigrant students in New York City, regardless of their ethnicity, national original or immigration status. Since its founding in 2012, AEF has awarded over $500,000 in college scholarships.

Prior to becoming an advocate, she built a successful career on Wall Street working for Goldman Sachs and Merrill Lynch, and had seemingly achieved the American Dream—yet she was not part of what defined American.

Julissa immigrated to America from Mexico at the age of 11 and was undocumented for almost 15 years, some of them spent rising to prominence on Wall Street. She made national and international headlines when she revealed that she had achieved the American Dream of wealth and status at Goldman Sachs while undocumented.

Julissa now uses her inspirational story to change the conversation around immigration.